Fantastic Beasts and Those Who Own Them

Two young Singaporeans share their passion for owning exotic pets despite the risk of fines and jail.

The Northern White Lipped Python is one of many wild species of snakes which are prohibited from being imported into Singapore.
Photo Credit: Anonymous Interviewee

W (not his real name) has been the proud owner of various exotic animals such as a snake, an Axolotl (Mexican walking fish) and various species of Stag Beetles.

The 20-year-old bought his first contraband animal, a Giraffe Stag Beetle, in 2019 after watching many YouTube videos by other exotic pet owners. He has since spent nearly $500 on the purchase of animals, a tank, chillers and other equipment.

“I think a lot of people are involved in this hobby for different reasons. Some people do it for the passion, or want something that’s different from a dog or cat because there’s a sense of exclusivity,” said W.

“In my eyes, I think reptiles are just better than [typical] animals and taking care of them is quite fun,” W said, adding that his hobby has also helped him make new friends who share the same love for exotic animals.

Another young Singaporean who keeps exotic pets is 19-year-old C (not his real name). He bought a Leopard Gecko from Gumtree in 2015, and learnt that it was illegal to keep it only one year later. Instead of giving up on his hobby, he’s added snakes, scorpions and a Hercules Beetle to his collection.

He estimated that he has spent about $1,500 on these acquisitions over the years. “Although it starts off very expensive to get all the equipment (to house the animals), it’s much cheaper than taking care of a dog,” said C.

He also feels that in Singapore, where many people live in small apartments, it’s “ideal” to keep these exotic pets “because they’re quiet and don’t require a lot of space”.

Despite stringent laws, Singapore is one of the major transit hubs for illegal wildlife trade due to strong connectivity that makes it ideal for moving products through the country, according to the World Wide Fund for Nature.

ACRES, an organisation which works to curb illegal wildlife trade in Singapore, also told The UrbanWire in an email interview that there has been a significant rise in the sale of exotic animals online in the past 2 years.

Both C and W said that their families are supportive of their hobby. C said his parents are not worried about him getting caught as his pets don’t make noise that would disturb their neighbours.

W added: “I’m blessed with an understanding mom who lets me do what I want because I’m old enough, and what I do doesn’t interfere with her, so that’s okay.”

“She said it’s my responsibility if I get caught which I think is fair.”

Over the years, exotic pet traders have shifted from platform to platform to remain off the grid.

C said: “It used to be Gumtree, then Carousell. At one point it was through WhatsApp groups and now it’s through Facebook. You sort of search and ask around, and you get contacts really slowly.”

When C was in school, he would also rely on word-of-mouth to sell animals that he didn’t have time to care for anymore such as scorpions. He said many contraband animal sellers would ensure that their buyers are able to give the animals proper care before officially closing the deal.

Likewise, buyers also want to take good care of their exotic pets since they have spent big on the purchase, W said. “In Singapore, we pay a lot for contraband animals, and that’s the reason why we have to do our research because a big chunk of money is being invested. If you pay for some small turtle that’s $2.50, people don’t realise what kind of care needs to be put into the pet,” he added.

According to ACRES, the Endangered Species (Import and Export) Act (ESA) makes importing and exporting any endangered species without a permit an offence.

Possessing, selling, offering or displaying any of these species to the public is also an offence if they have been imported illegally.

One main issue with exotic animals comes when they are accidentally or intentionally released into a non-native ecosystem, which may disrupt biodiversity, introduce diseases and affect public safety. 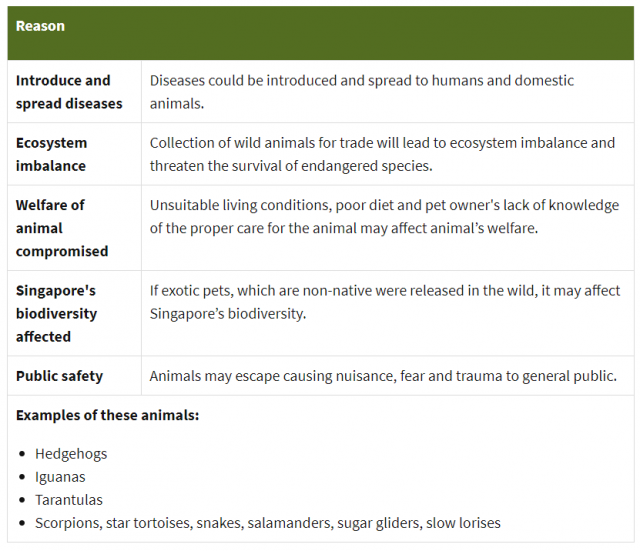 This table from NParks lists the various reasons Invasive Alien Species (IAS), or exotic pets released into the wild, can be harmful to Singapore’s ecosystem.
Screenshot from NParks

Additionally, exotic animals may not adapt well to living in captivity, especially when their owners do not know how to meet their dietary and other needs, ACRES mentioned.

“Wild animals are best appreciated in the wild … Just because the animal is captive bred, it doesn’t justify the love for the animal where it pays the price by entirely losing the freedom of choice,” ACRES added.

Yet, exotic pet owners like W and C feel otherwise. While they understand the rationale behind the regulations, they feel that the rules can be relaxed.

W shared: “I’d at least rework the law a bit so people with proper experience and people who actually take their time to learn (about taking care of the animals) … will be able to keep these animals in peace.”

C also believes that instead of banning every animal, there should be more education on why these animals should be protected instead of feared.

Taking proper care of exotic animals takes a lot of time and effort, but it is a rewarding experience for owners like W and C.
Photo Credit: Anonymous Interviewee

For now, both are determined to keep their hobby going.

“For me I’m always prepared for the day (NParks) raids my house and steals (my pets) away … because (caring for these animals is) my passion, and I’m willing to do anything for it.” W said.

Any person or company caught violating the ESA can be fined up to $50,000 for each illegally imported or traded animal and/or jailed for up to 2 years.