Jasmine Sokko: The Voice Behind The Visor

Young Singaporean electronic musician Jasmine Sokko shares how The Chainsmokers and Grimes made her day.

This story is the winner of AUGUSTMAN‘s “Every Face Tells a Story” writing contest. It’s also published on http://bit.ly/2HKOGlO.

Imagine waking up, looking at your phone and seeing your idol’s name appear on a notification.

“When I got the notifications in the morning, I looked at my phone and screamed.” 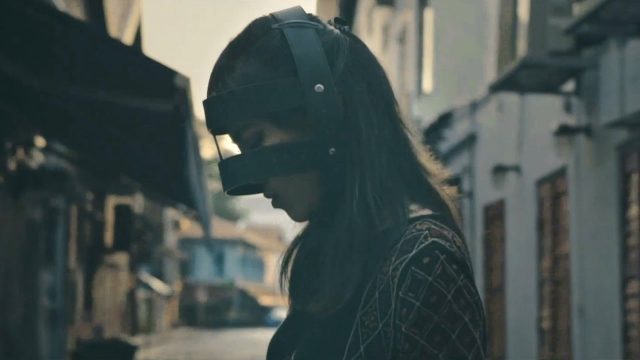 Jasmine Sokko conceals half of her face in all her appearances in hope that listeners can focus on her music. Photos courtesy of Jasmine Sokko.

“I used to listen to the Chainsmokers and I still listen to Grimes a lot,” said a beaming Jasmine, whose song “#0000FF” was reposted by The Chainsmokers on their SoundCloud. Her other song “Porcupine” was also added to Grime’s playlist on Spotify.

The mentions by the 2 big names in electro-pop music excited many local fans of Jasmine, who is also known for performing with a visor that conceals half her face.

The singer-songwriter who produces all of her music first emerged in the local music scene 3 years ago when she dropped the music video for “1057”. The song went on to top Spotify’s Singapore Viral 50 chart.

The visor-wearing singer conceals half of her face when she performs as she believes this helps keep her audience focused on her music.

“When people encounter your music first, you can pick what people will judge you based on.”

When it comes to the visual aspect of her music, she believes it’s all about “translating your sound into visual form and how you would envision it to be”. Most of her songs turn into dark colors in her mind – which explains her entire wardrobe of black clothes and accessories.

Another quirk of Jasmine’s: She’s known for naming her albums and song titles using combinations of letters, numbers and symbols.

She laughed as she recalled how fans had a hard time pronouncing one of her track titles, #0000FF.

“I’m just very intrigued by how numbers can mean so much … across different languages and cultures.”

Jasmine started liking electronic music when she was a 13-year-old watching YouTube videos in her room. She now writes songs by drawing inspirations from her personal journey and the people she meets.

Named 987FM’s top local act of 2017, she has performed at many local events and festivals like Scape Invasion, Stärker Music Carnival and ULTRA music festival.

Although the Singapore market for electronic music remains relatively small, she said she doesn’t feel geographically bounded as platforms like Spotify and SoundCloud make it easy for people from all over the world to hear her music. “Being digitally present means you can be everywhere.”

As Jasmine continues to grow with her music, she anticipates collaborating with other local and international musicians.

The business student in Singapore Management University said she doesn’t have a concrete plan for a full-length album soon, but she’ll keep on writing songs.