Sara Bareilles – The Queen of Everything

Beauty, a mesmerising voice and three Grammy nominations. That’s the cred Sara Bareilles, accompanied by her trusty lead guitarist, brought to the stage during her concert in Singapore.

She’s not your typical girl-next-door, nor does she posses the beauty of the revered prom queen that is the envy of all women. But what she’s got is something out of this world altogether. It’s hard to put it all in words.

You see, when you walk in to a concert hall filled to the brim with hoards of screaming fans on the verge of plunging out of their seats to get a piece of you (literally), you’d probably be looking out for your bodyguards with your peripheral vision. Whipping out your video camera to capture that very moment of frenzy wouldn’t be the first thing on your to-do list. 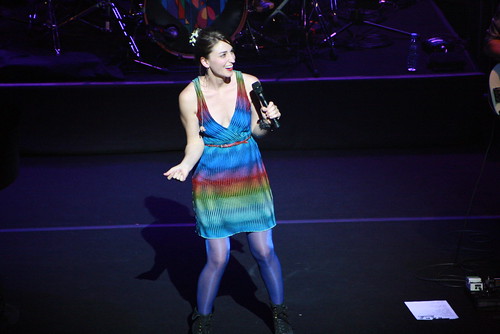 But that’s exactly what Sara Bareilles did, with a convincingly pure, unadulterated expression of joy. You can’t help but just smile at how seemingly ordinary and down-to-earth she is, standing there in a rainbow, “Kaleidescope Dress”, along with playful sheer purple leggings and a subtle touch of frangipani petals beneath her hair.

The three-time Grammy nominee kicks things off into high gear with Uncharted, her latest single off her sophomore album, Kaleidescope Heart. The connection she makes with the crowd is instant. It’s real; how she breaks out into occasional bouts of laughter in song and shakes her head in disbelief at the reception of the roaring crowd. A few bars into the performance and you feel the conviction bouncing off the keys and her pristine vocals. Sara was on the verge of delving into some truly uncharted territory.

And that’s precisely what she does next, as she put her distinct Sara-spin on Sasha Fierce’s epic hit, Single Ladies (Put A Ring On It). Sara moves away from the keys and takes her place up-stage, flaunting some impressive moves that set the temperature rising like El Niño.

While music pundits have long placed The Worthy Stamp on artistes who sound as good live as they do on their albums, Sara does not qualify for that hallmark. Rather, she is over-qualified for that. As she takes the stage with Many The Miles from her debut album, Little Voice, the audience is treated with a switched-up version of the track that’s heavy on deft, impressive guitar solos, courtesy of Javier Dunn, her trusty lead guitarist. With dexterity on the 6-string, the talented guitarist, who is a musical mix of Kings of Leon and John Mayer, sends the audience erupting in the incredulity of it all.

Just when you think things can’t get any better, Sara breaks another boundary with City. As she aptly puts it before the song, “We (the band) don’t always have the luxury of being in an incredible building like this. Excuse me if I go to another place mentally, this is pretty awesome.” 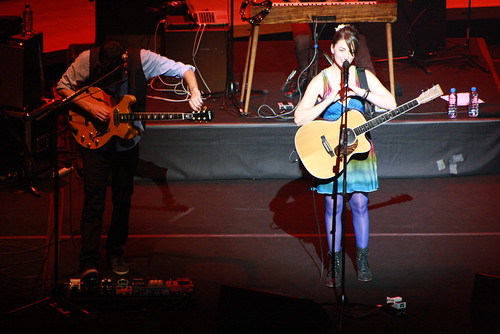 Showing that little bit of love to her fans, Sara keeps them constantly on their feet.

That’s exactly what she does yet again, as she performs the piano ballad and chills you to the bone. Sara is skilled at accentuating the subtle nuances in her voice and tone at the right time. At the end of the song, the final note lingers in your head and strikes a deep emotional chord within.

As she comes back shortly for her encore after ending her set with the feminist anthem, King of Anything, the crowd goes back into frenzy mode as a mini mosh pit starts to form at the base of the stage, and even at the balconies. Sara takes her place behind the guitar and performs a commendable version of the upbeat Let The Rain, but the true standout of the night was her final piece, Gravity.

“I cannot thank you enough for being the most amazing audience of all time, seriously, you guys are the best (audience) in the world. I wish I could just take you with me wherever we go,” gushes the 31-year-old musician, before she takes a moment to compose herself for the ballad that the fans have been waiting for. What comes out of the performance is a truly magical experience, as Sara connects with the audience on a powerful, emotive level like no other.

A class act through and through, Sara Bareilles surpasses a musical and emotional level far beyond what is stored on the record. Die-hard fans’ iPod staple of Sara’s hits will never sound the same after witnessing the musical epiphany within the realms of the Esplanade Concert Hall.

While it is hard to get out of the musical stupor that is Sara Bareilles, it is impossible to discredit Javier Dunn, Sara’s long-time friend and guitarist, who opened the show with a solid 5-song repertoire with his stellar pipes and acoustic guitar in hand. 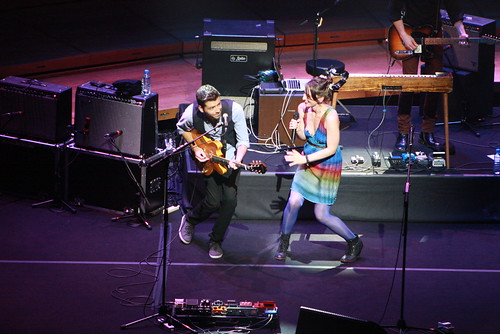 Sara was not the sole star of the show. Her lead guitarist, Javier Dunn (left), impressed the crowd with his fingerwork and amazing voice.

Armed with the 6-string, he wowed the crowd with his acoustic original hits like If You Go and One Good Reason, and ingeniously incorporated verses from Bruno Mars’s Marry You and Adele’s Rolling In The Deep into his performance. With a combination of some skillful guitar tapping and commendable looping pedal work, Javier is definitely one artist to look out for.

It’s hard to say if he will become a worldwide sensation like Sara. Then again, you know you’re well on your way there if you have a vocal prowess like Jason Mraz and Kings of Leon, and rad guitar skills like John Mayer all put together.

7 Replies to Sara Bareilles – The Queen of Everything