‘Don’t Cry’? We at The UrbanWire did, ironically, after watching Park Bom’s latest music video. 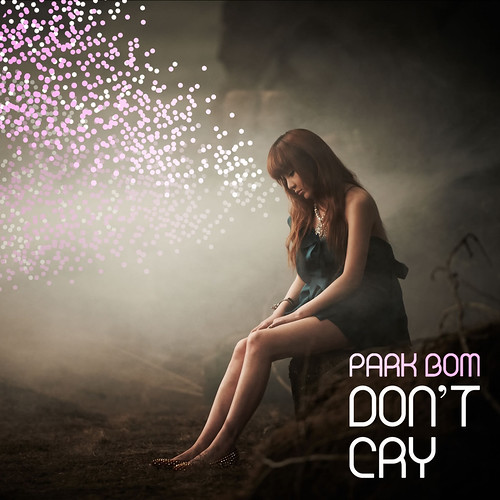 In the midst of label-mate Big Bang‘s promotions, 2NE1‘s Park Bom sprang a pleasant surprise for fans on Wednesday with the release of a new track and MV for ‘Don’t Cry’.

And it looked like Blackjacks (fans of her band 2NE1) were relishing every single moment of her solo comeback, as it garnered more than a million views within 2 days of its release on YouTube.

Bom’s record label YG Entertainment, which revealed teaser images one day prior to the song’s premiere, enlisted the help of their new PR (public relations) manager Sandara Park – who happens to be Bom’s fellow bandmate in 2NE1.

And the ever-cheeky Dara posted her tongue-in-cheek version of the teaser through her me2day micro-blog. The 12-second video showed her literally wiping off ‘tears’ from the screen of her Macbook Air, which was playing a video of Bom on it.

With all that hype surrounding YG Entertainment artistes since February, how did Bom’s sophomore single fare? The UrbanWire checks it out.

1TYM is all it takes

Just like ‘You and I’, Bom’s debut single released 2 years ago, ‘Don’t Cry’ was produced by none other than YG’s resident rapper and music maverick, Teddy Park.

The leader of rap group 1TYM sees his production style depart from the typical R&B and hip-hop instrumental arrangement prevalently utilised by him from 2008 to 2010.

Gone are the recognisable sounds of the hi-hats, hybrid snare-claps and toms, Teddy’s trademark sounds commonly heard in songs like Taeyang‘s 나만바라봐 (‘Look Only At Me’), ‘Where U At’ and of course, Bom’s ‘You and I’.

Instead, Teddy’s musical style has shifted with the times, fittingly so, with the introduction of club-house synths and thumping dance-pop beats.

‘Don’t Cry’ is thus a pleasant tune for easy listening, with its soothing piano riffs reminiscent of ‘You and I’. Bom’s command of the English language is ever-resounding, seamlessly belting out the chorus, “It’s okay, baby. Please don’t cry.”

Still, will this song be able to wrestle away the top spot on the charts from label-mate Big Bang, whose latest single ‘Love Song’ has been at the peak for 4 weeks? Only time will tell. Good luck, Bommie.

If you haven’t watch the music video of ‘You and I’, here’s a tip – watch it right now.

Like ‘You and I’, the music video for ‘Don’t Cry’ has its own storyline.

The former’s storyline depicted Bom’s struggle and hard work to cheer up her ailing lover, who, as most melodramatic Korean music videos would have it, passes away at the end.

‘Don’t Cry’ seems to be a sequel to the 2009 hit, as the video chronicles her chase for her deceased lover, taking her into an alternate world.

Shrouded in mist with dark clouds looming ahead, the set of the video is reminiscent of Taeyang’s ‘I’ll Be There’ music video, sans zombies and gravestones.

A blue monarch butterfly appears halfway through, supposedly the manifestation or reincarnation of her deceased lover (played by actor Kim Young-kwang). The winged insect leads her to a long-awaited reunion with her lover, now in human form.

A touching scene of embrace plays itself out, with flower petals as confetti adding vibrancy to an otherwise drab and gloomy backdrop. Sadly, the reunion lasts only 30 seconds, when her lover returns the matching ring on his finger.

The heartwarming ‘awww’ factor gets bigger after his departure, when the rings magically bond – an allegory to the phrase “love never dies”.

Just like 'You and I', 'Don't Cry' is another heart-wrenching tear-jerker.

All in all,  we couldn’t help but feel a sense of irony in the title of ‘Don’t Cry’. The music video is another successful tear-jerker from YG and another potential hit for Bom, whose band 2NE1 is planning for a Korean comeback after breaking into the fray in Japan. 4 stars for a simple but brilliant music video from Bom.