We present the mastery of Desmond Kon’s literary works. An audio recording, poems and a track from the audio book, How to Read a Poem

UrbanWire presents the mastery of Desmond Kon’s literary works together with an interesting email interview that reveals the poet’s influences and his opinion on the literary scene in the US and Singapore. An audio recording, poems and a track from the audio book, How to Read a Poem, all for your reading and listening pleasure.

* Wu Zetian remains the only woman in Chinese history to rule as an emperor. Sometimes excessively criticized for her autocratic rule, Empress Wu ruled between 690-705 AD during the Tang Dynasty. These two sonnets, reflecting off each other, recast and expand the first English translation of the poem by Kenneth Rexroth and Ling Chung, written as an octave. This poem first appeared in The Pinch.

these are short-lived curios, volcanic ash

imagine no one finding anyone interesting anymore

all bets off, body bags tagged; into oceans, walk
all skinned on big-bilge water, latex, splints

and everyone flees what’s been situated

but what about the through road today dragging
itself thoroughbred affection, through and through
what makes you stay; sylphlike, my fly-fish lining

what of consensus; what of leeward conversions?

* The word “hierarchy” originated from hierarchia (“ranked division of angels”), first coined by the anonymous Pseudo-Dionysius the Areopagite, a 5th Century Christian mystic theologian-philosopher. The term “hierarchy” can also be etymologically traced to ta hiera (“sacred rites”) and archein (“to lead, rule”). Pseudo-Dionysius understood all reality to be hierarchic, believing, as René Roques asserts, that “the totality of this twofold universe, the angelic and the human, constitutes a sacred order, an understanding, and an activity, all regulated by the law of hierarchical mediations, both in the sense of the ‘descent’ of divine illumination and in that of the ‘ascent’ of divinization”. The third choir of the second hierarchy of angels, Principalities remain the guardian angels of the world’s territories. They manifest as rays of light. This poem first appeared in Faultline.

From the audio book: How to Read a Poem
Inspired Poem by: Peng-Ean Khoo
Pipa by: Samuel Wong Shengmiao

“The Trapeze Artist” is a track from How to Read a Poem, first published in 2003.The recording features Samuel Wong Shengmiao on the pipa mimicking the theatrics of Peng-Ean Khoo’s “The Trapeze Artist”. The album was created as an audio book for the creative anthology, Dead People, Flying Fishes And The Ones Who Missed Boat, for which Desmond Kon was the editor. 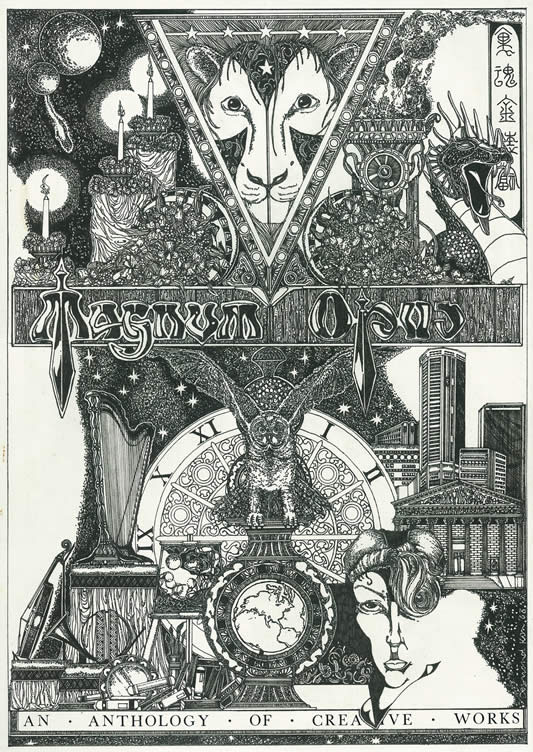 This illustration is reprinted here. It first appeared 20 years ago as a centrefold in My Word, a junior college literary magazine on which Desmond contributed his artwork.