Back to the iFuture

Step into the iFuture exhibition and you’ll find out that you don’t have to go far into thefuture to be living in a sci-fi movie. With over 100 fascinating exhibits from Singapore and around the globe, Singapore Science Centre’s (SCC) latest showcase brings products once a figment of men’s imagination onto our shores. And with […]

Step into the iFuture exhibition and you’ll find out that you don’t have to go far into thefuture to be living in a sci-fi movie.

With over 100 fascinating exhibits from Singapore and around the globe, Singapore Science Centre’s (SCC) latest showcase brings products once a figment of men’s imagination onto our shores. And with the school holidays over and the hordes of screaming students out of the way, there’s no better time than now to catch this than now.

Something fresh for everyone

The majority of iFuture exhibits are interactive games and gadgets set to keep hyperactive kids entertained for hours.

From a virtual golf game and graffiti wall to a shooting game, which combines elements of the legendary Pacman and famous arcade game Dance Dance Revolution(DDR), iFuture could just be the template of a commercial arcade a few decades away.

As for the tech savvy crowd, you might have read or heard of the exhibition’s technology, which might be a novelty to the public, but there’s still something for techies to learn from the daily workshops and talks.

These sessions are also a part of iFuture’s 3-month long exhibition. Featured in The Straits Times on December 12, wacky Australian anatomical architecture artist Stelios Arcadiou, who has an implanted ear in his arm, kicked off a series of talks to be held in conjunction with iFuture. The artist spoke about his projects regarding “the extension of the human body with technology”, an apt topic which, like iFuture, predicts how technology will play a vital role in our future lifestyles.

“Singapore’s outlook is exciting with infocomm, and this exhibition expresses men’s thinking and what is in store for us in the future,” said Dr Chew Tuan Chiong, SCC’s Chief Executive.

iFuture gives Singaporeans a peek at how infocomm (information and communication technology) can be heavily integrated into our daily lives, and iSpace, one of the exhibition’s sub categories, features the practicality of Radio Frequency Identification (RFID) technology. 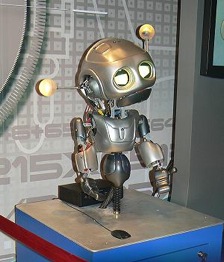 Being the pioneering science centre in Asia to apply RFID technology to digitise information, the SCC is proud to present its visitors a series of exhibits which might seem oddly familiar to science fiction fans.

Named after the technology found in the movie Minority Report, one of the RFID exhibit is called The Odyssey Report. It functions just like the technology Tom Cruise used in the movie. By using hand gestures, you get to control a projected screen on the wall. Users might feel a little awkward grabbing the air and ‘moving’ icons around, but this sensor-enabled tool is easy to direct and enables your hand to act as a cursor on the desktop. It may take some getting used to, but it sure does cool!

Another likely favourite is Audio Spotlight, a 3-in-1 television system which allows 3 persons to be in the same living room and watch different programmes on the same television set. Just like stickers which illustrate a range of images by tilting it at various angles,Audio Spotlight’s television works exactly the same way. However, not only would the trio be able to view different programmes simultaneously, 3 directional speakers above the television set also project the particular programme’s audio only towards the individual. This revolutionary innovation might just end the relentless bickering over the remote control among family members, if not send ordinary TV set sales plummeting.

The convergence of technology

Drawing a parallel to the intertwining fibre-optic tree in the middle of iSpace, Mr michael Chay, Assistant Director of SCC’s PR & Marketing Department, said that as different aspects of technologies converge, Singaporeans are presented with many thrilling opportunities.

“People want to know what is out there for them, and as IT becomes a part and parcel of everyone’s lives,iFutureis here to give locals a touch of tomorrow,” Mr Chay said.

Unlike the 3-month long iFutureexhibition, iSpace is a 5-year showcase that will gradually develop to accommodate future advancements in the infocomm industry.

“Just like how 20% of the Science Centre’s exhibits change annually, iSpace would continue to look towards industrial partners like Nanyang Technological University and National University of Singapore for more updates on the fast paced IT business,” Mr Chay explained.

iFuture is a result of the partnership between Singapore Science Centre and the Infocomm Development Authority of Singapore (IDA), and was officially launched by Preseident S R Nathan on Dec 10.

Name:iFuture – a touch of tomorrow

One reply to Back to the iFuture